Why Modular Construction is the Way Forward 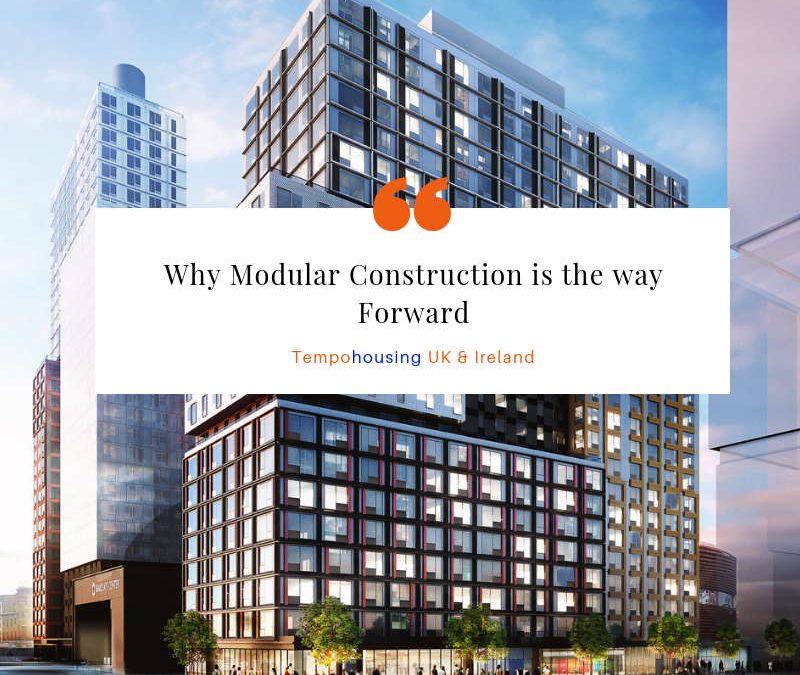 Let me start by explaining what modular construction is….

Modular construction is a method where a building is constructed off-site/in a factory under strict controlled conditions. The process adheres to the same codes and standards as conventional construction but is built in less than half of the time. The buildings are created in “modules” or sections in a factory and then transported to the site where they are put together piece by piece.

One of the great benefits of modular construction is the buildings are generally stronger than traditionally built as each module is designed and produced to independently withstand the demand of transportation and craning onto the foundations. By the time they arrive on site the modules are up to 95% complete. This process allows work to continue regardless of the weather conditions which would normally affect traditionally built structures.

Here at Tempohousing we use a special type of light weight concrete (or “aerated concrete”). It is a new product that has developed due to the ideal properties of concrete for improved sound insulation, better fire resistance and the ability to accumulate the indoor temperature. Traditional concrete is too heavy for transporting a complete module by truck, therefore light weight concrete is a perfect solution. The insulation on our modules is a far cry from the post war prefabs that would have been used as a quick fix to the post-war housing crisis. Much criticism towards modular has been based on the quality and design of the prefabricated housing developments constructed after WW2. Times are changing, and the days are long gone where pre-built/modular homes were associated with uniformity and cheap construction. The advancements in design, construction and materials used has increased the number of developers and government bodies who value the advantages of modular homes.

Another reason why modular is the way forward is the great environmental benefits of this style of construction. We build with eco-friendly building materials and all the steel bases we use are easily recyclable. In addition, the fact that most of the construction is done off-site there is a significantly lower impact on the environment as well as less noise, traffic and pollution surrounding the site. The aerated concrete which I mentioned previously is designed whereas it helps to reduce at least 30% of environmental waste, decrease over 50% of greenhouse radiation and over 60% integrated energy on the surface of brick. It has excellent fire resistance, the eight-inch-thick concrete walls achieve a four-hour rating and is non-combustible meaning it doesn’t burn or give off any toxic fumes.

Suitable for all Budgets and Versatile

Other projects where modular can benefit is office blocks, such as the ARTworks London in Elephant and Castle. The 60 container homes on Walworth Road provide space for 60 different occupiers, with priority given to small and start-up companies. The Artworks Elephant as the project is called, utilises recycled shipping container homes to provide low cost business and retail space for creative and start-up companies in Southwark. Tempohousing provided these container homes to the developer, using the modules that are manufactured in Holland in a social factory, where youngsters with no employment are trained on the job to build container homes. The same container homes from this factory were used for a homeless shelter project in Brighton. Off-site construction can be used for a wide variety of building structures. We built a school in the Dutch Antilles (Isle of St. Eustatius) in the Caribbean and with our methods we erected the school in just 7 days. In addition to the speed of the project the budget was also kept relatively low. Small islands tend to have expensive shipping costs. To save on these shipping costs, the entire building was shipped as flat packed modules of 15 m2 each. The whole building could be shipped in two 40 ft shipping containers, including all additional items of the sanitary rooms, the furniture and other parts to complete the building. After assembly six flat pack modules created a space of 90 m2 or 270 m3, while the shipped volume is only 90 m3. Especially for larger projects, this volume reduction means a significant saving in shipping costs. Among offices, schools and residential construction, off-site can be used for retail, hospitality, government and healthcare to name a few.

Speed is another great benefit of modular construction. Due to simultaneously on-site and off-site work the buildings are up to 50% quicker to occupy. For example, the school we built in the Dutch Antilles was quickly needed during the renovation of the original school building. After arrival on site the entire school building including sanitary rooms and air conditioning was completed in only 7 working days with a crew of 4 (with support from 4 locally hired workers). In the governments White Paper, they said that at least 250,000 new homes are needed each year to keep pace with demand. This is where modular fits in perfectly, we can erect great quality, comfortable and affordable homes in such a short space of time. Our methods have been tried and tested time and again and we deliver developments fast and on time. Whether it’s a school or residential building we can deliver rapidly and on-time.

Faster and Higher Return of Investment

The fact that buildings are 50% faster to occupy yields a much faster and higher return on investment for developers. The faster turn around time means more money and sooner. The costs can also be cut by 20-30% due to the shorter build time and there are less labour costs involved.

To sum up off-site construction has a faster build time, is eco-friendly, generally stronger and can yield a quick return on investment. Each venture is unique and with early project planning, off-site is a great solution to controlling schedules and working with a variety of budgets and at the same time increasing quality and reducing the environmental impact.